Mosses, liverworts and hornworts are all non-vascular plants that have stems and leaves, but no roots; they attach themselves to the substrate on which they live by means of root-like rhizoids, which are modified stems; they do not absorb water or nutrients through  these rhizoids, instead doing it directly through the leaves and stems. Most live in permanently damp conditions, and the few that can tolerate occasional drier periods need moisture for part of the time, as it is needed for reproduction to take place. Many live in shady conditions, but they do need enough light for photosynthesis.

They reproduce both sexually and asexually. There are some minor differences between mosses, liverworts and hornworts in their reproductive cycles, so I have described them separately below. They have two main stages to their lifecycle – the sporophyte, a non-sexual diploid (two sets of chromosomes) stage which produces spores, which then grow into the sexual phase, the gametophyte; this produces haploid (one set of chromosomes) male and female gametes , which undergo fertilisation to form the single-cell diploid zygote; the zygote grows to be become the multi-cellular sporophyte, and the whole cycle can start again.

Some are difficult to identify to species level without the use of a microscope, and the knowledge of what to look for – both beyond me at present unfortunately!

‘Leaves’ are arranged spirally or radially around the stem.

The body is radial.

Always have leaves, which have a midrib.

Sex organs are positioned at the end of the leafy gametophyte.

‘Leaves’ are arranged in a flattened pattern forming two or three rows.

The body is dorsiventral i.e. different upper and lower sides.

Sometimes have leaves, which have no midrib.

Sex organs are positioned on the dorsal side of the thallus (the flattened mass of tissue forming its body). 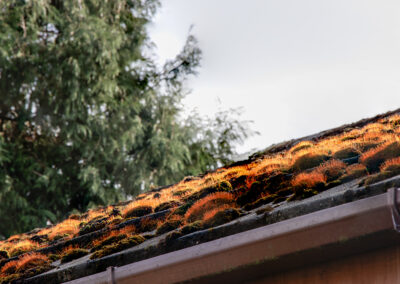 Moss on a roof

Moss on a roof 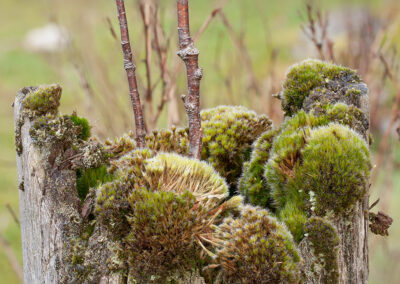 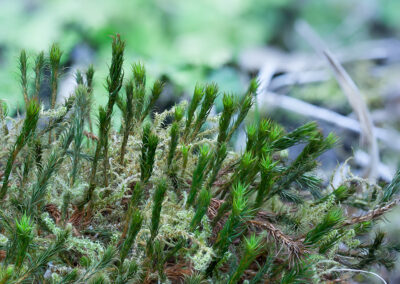 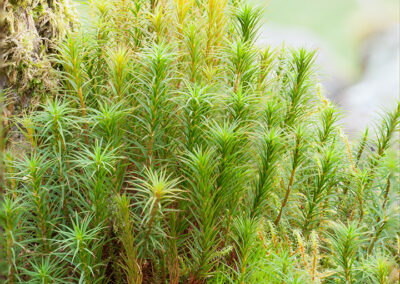 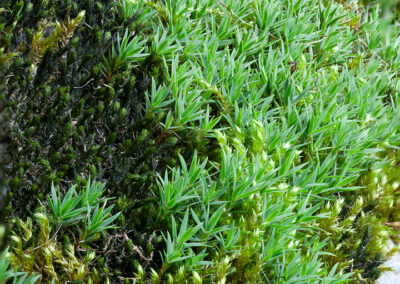 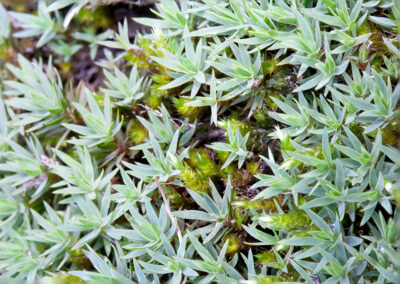 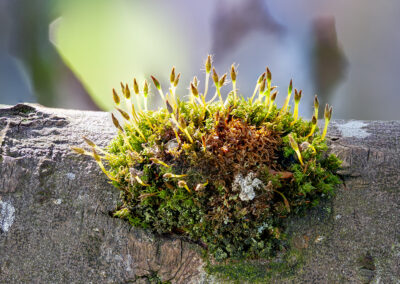 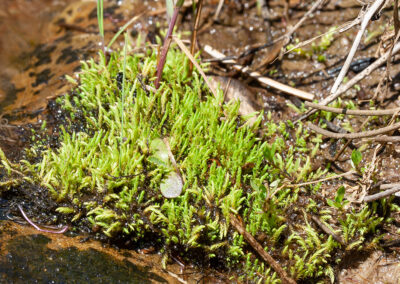 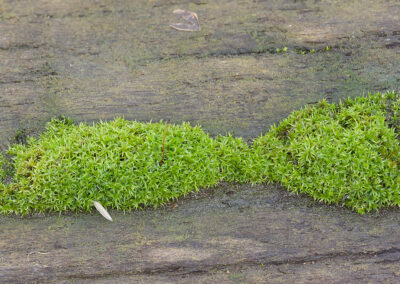 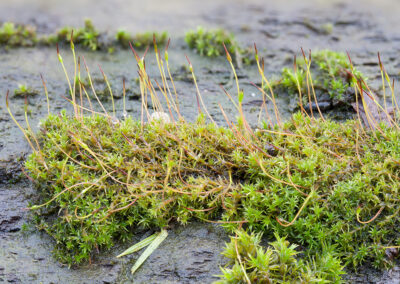 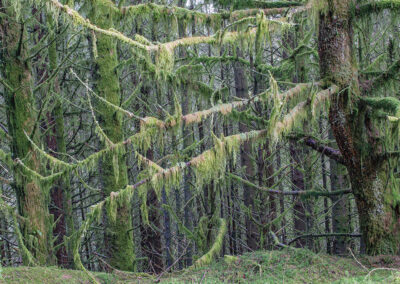 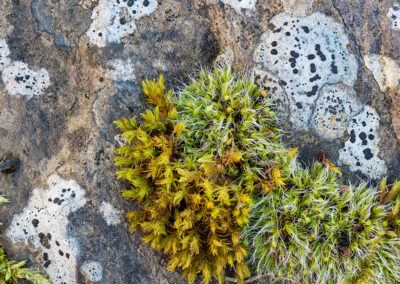 Mosses and lichen on a rock

They are important ecologically as they help to break down the substrata on which they live, releasing nutrients for other plants to use. They are also useful in limiting soil erosion by providing surface cover for bare ground and absorbing water. Mosses in the Sphagnum genus are important as they are the ones that turn into peat as they die and decay.

In sexual reproduction, male sperm develop in the antheridium, and are released to fertilise the female egg in the archegonium – these may be on the same plant or different plant, depending on species. The sperm swim to the archegonium using two flagella, which is why moisture is essential to mosses. As the fertilised embryo develops, it grows into a sporophyte with a calyptra (a stalk with a capsule on the end of it) – see some of the photos in the gallery below – which contains spores; when mature the spores are released, and either fall directly to the ground or are wind-distributed. The spore then germinates and grows into a protonema, which can appear either as a mass of thread-like filaments or a flat thallus; from this grows the mature plant, ready to start the cycle all over again.

Asexual reproduction – in many mosses green vegetative structures called gemmae are produced on leaves or branches; these can break off and form new plants, genetically identical to the parent plant.

Liverworts, unlike most plants, spend most of their lives at the gametophyte stage of their life cycle.

Asexual reproduction – in many liverworts, green vegetative cup-like structures called gemma cups; these contain small clusters of gemmae, which are dispersed when rain or other water splashes into the cup; these may grow into mature gametophytes if the conditions are right, and will be genetically identical to the parent plant.

I have not seen any yet in Dernol, but have done so at Gilfach, so they might be here.

I have not found any in Dernol, but have included them as they might be here.