Ferns are a group, not taxonomically distinct, of vascular plants that broadly includes, as well as various types of ferns, horsetails (Equisetaceae), clubmosses (Lycopodiaceae), spikemosses (Selaginellaceae), quillworts (Isoetaceae), adder’s tongues (Ophioglossaceae), pepperworts (Marsileaceae) and spleenworts (Aspleniaceae). I am only covering ferns and horsetails here, as they are the only ones I have seen so far in Dernol.

There are more than 9,000 known species of ferns worldwide, of which about 64 are native to the UK.

The ferns reproductive cycle is quite different to that of a flowering plant, and is quite complex. There are some differences between different types of ferns, but what follows is a generalised description that gives an idea of the processes involved.

Instead of producing seeds, they asexually produce spores from sori on the underside of their fronds, which are genetically identical to the parent. The spores are dispersed by wind or water, and if they settle in a suitable location (usually moist and sheltered from sunlight), they germinate and grow into tiny plants, gametophytes, which look nothing like the parent plant, more like a thin, green plate. These gametophytes develop sexual organs. Sperm are produced in the antheridium, and when mature are ejected in order that they can swim, with the aid of hairlike organs (cilia), through a film of water towards the egg-producing organ, the archegonium, where fertilisation takes place. Sometimes the eggs are fertilised by sperm from another plant, which leads to genetic diversity, unlike with self-fertilisation. After a period of growth, the embryo grows until it is mature enough to break out and begin life as an independent plant (the sporophyte).

Some species of fern can reproduce through a different asexual process, where new plants, genetically identical to the parent, sprout from the spreading rhizome (root) of the parent. 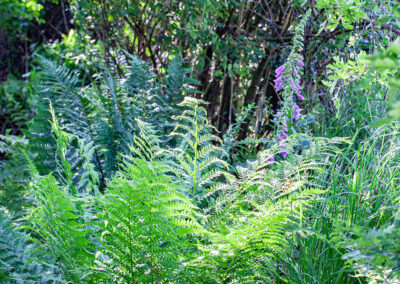 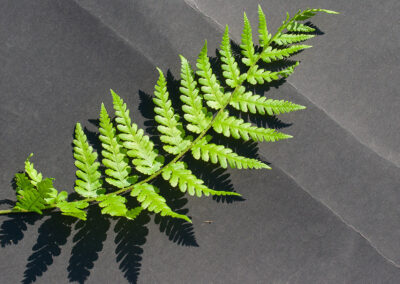 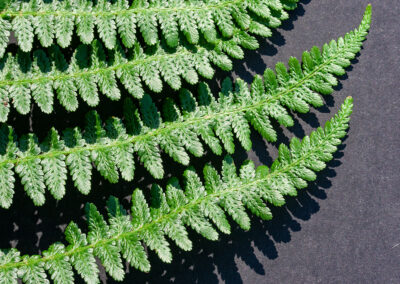 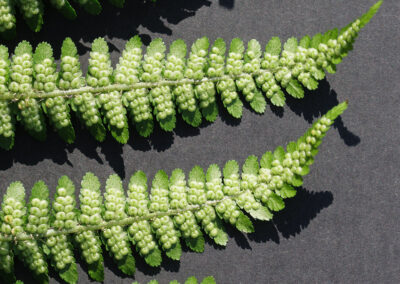 Horsetails, of which there are about 8 species in the UK (though they can hybridise), are an ancient genus of vascular plant.

They have two main parts – a perennial underground rhizome (root), and an annual aerial shoot. The stem of the hollow shoot is longitudinally ridged between leaf-bearing nodes, the ridges / troughs alternating in adjacent inter-nodes. The leaves are arranged in whorls at the nodes, the number of leaves usually being the same as the number of ridges on the stem node immediately beneath them. The leaves play a minor role in photosynthesis, most of it being carried out by the stem.

Like ferns, they usually reproduce sexually via spores. The male spores are produced in antheridium at the tips of some of the stems, often in a cone-like structure, the strobilus; they swim to fertilise the female egg in the antheridium.

Also like ferns, they can reproduce asexually via tubers that develop on the rhizomes.

They can be invasive and hard to get rid of if growing where they are not wanted.