Algae is a general term covering many organisms, ranging in size from microscopic single-celled species to multi-cellular organisms such as  giant kelp, which can be 160ft. long. Most algae photosynthesise via chlorophyll, like plants, but do not have the true roots, stems, leaves or vascular tissue of the higher plants, in this respect being like the mosses, liverworts and hornworts.

They are fundamental to life on earth, producing about half of the oxygen we breathe, and are at the base of the food chain for most aquatic life (often as plankton). They may become increasingly important as the producers of biofuels and as factory-produced food for human consumption (as some naturally-occurring seaweeds currently are).

They are also responsible for ‘algal blooms’, often seen in our oceans; these are caused by the presence of excess nutrients, often the result of agricultural run-off fed to the oceans by rivers, and which allow the algae to grow rapidly, thereby depleting the water of oxygen and killing off other life forms.

The greatest number of species live in water (including ice and hot springs), but some live on soil, the coats of animals, fungi and other land plants, tree bark and rocks, and take many different forms. Those I have seen in Dernol are on tree bark and in our garden pond; I don’t expect to find any of the seaweeds here, unless the increases in sea level are much worse than expected! 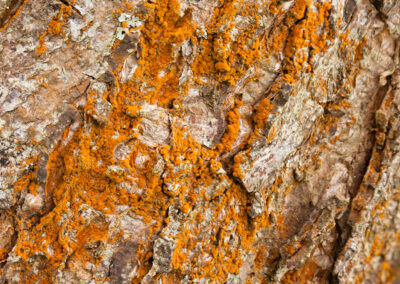