There are several phyla of worms, but here I will be dealing only with the phylum Annelida, which means that I will be ignoring the majority of worms that live in Dernol – the nematodes, microscopic unsegmented roundworms that live mostly in the soil, or as parasites in animals.

Earthworms and leeches are both Annelids;  there are about 22,000 Annelid species worldwide, of which …. species live in the UK. All live in water, soil or other moist environments.

Annelids’ soft bodies are segmented, each segment having its own set of organs, though the foremost and rearmost segments are different; the foremost segment (prostomium) contains a simple brain and sense organs, and the muscles in the blood vessels of some of the other segments near the front of their bodies are built up to allow them to act as a very rudimentary hearts; the rearmost segment (pygidium) has been modified to produce an anus.

Earthworms and leeches can change the shape of individual segments, lengthening and shortening them, which, in combination with short bristles (chaetae) on their underside, allows them to move via ‘peristalsis’, ripples that pass along the body.

Being soft-bodied, annelids have left very few fossil traces, but sometimes the tubes that some species lived in are mineralised, and these show up in the fossil records; on the ‘Geology’ page of this site are some such fossils, traces of possibly annelid worms that lived in what is now Dernol in the Ordovician or Silurian periods, 520-410 million years ago.

Earthworms are important for a number of reasons:

They are hermaphrodites, which means that they have both male and female sex organs, and during mating they both fertilise each other by lying alongside each other facing in opposite directions in order for the male / female organs to line up with each other. After they separate, the pale coloured band around the body (‘clitellum’) forms a ring around the worm. The worm then slides out of this ring, and as it does so, the ring passes over its own eggs, which stick to it; as it continues to slide out of this ring, the eggs in it pass over the sperm from the other worm and get fertilised. When the ring drops off, it closes at both ends and becomes a cocoon for the developing eggs. 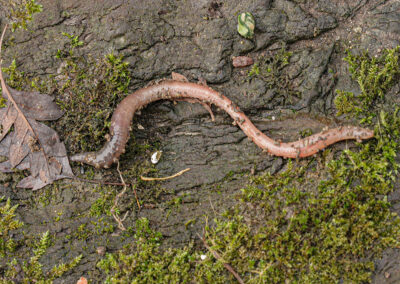 There are about 680 known species of leech worldwide, of which 16 species live in the UK. All UK species live in slow-moving or still fresh water, though the Horse Leech (which does not feed on horses, and is not seen in Dernol) does occasionally venture onto land to find earthworms.

Unlike earthworms, leeches’ segment markings do not correspond with their internal segmentation, their internal structure being quite different. Externally they appear to have 102 segments (annuli), but internally they have 32 / 34 segments (does anyone know which is correct?). As well as the longitudinal and circular muscles found in earthworms, leeches also have diagonal muscles, which makes them far more flexible. Their bodies are flatter than those of earthworms, and taper into suckers, at both ends in most species; the rear sucker is used to fasten on to the host, or as a fixed point to extend from when moving about, the front one for feeding.

Their mating posture is similar to that of earthworms, but the egg-laying is different. Some time after copulation, the small eggs are laid, usually into an albumin-filled cocoon, either singly or a few at a time. The cocoon is fixed to a submerged object.

Most leeches are parasites, sucking the blood of their hosts. Although this can be unpleasant it is rarely harmful and produces no lasting effects. The species of leeches found in Dernol cannot penetrate human or other mammalian skin, so can be considered harmless. They are likely to feed on molluscs, tadpoles or the larval stages of insects that live in the water.

According to The Guardian : “Medicinal leeches (Hirudo verbana and Hirudo medicinalis) as used in the UK have 10 stomachs, 32 ‘brains’, 9 pairs of testicles and several hundred teeth” – not many of us can claim that!