There are about 15,000 species, in over 2500 genera, of freshwater fish worldwide, with 38 native species, and about 12 introduced species, living in the UK.

As far as I know, there are only three species living in the Dernol.

Bullheads have speckled brown colouration (good camouflage), and a flattened head with a large mouth and large eyes positioned on top of their head. They have no swim bladder.

They live in clear fast-flowing streams with stony bottoms – so the Dernol is ideal for it. They are rarely seen in daylight unless disturbed. Lifespan – 3 – 4 years.

They build a small nest of stones and lay their eggs on the underside of the stones. These nests are enthusiastically defended against predators by the males.

They feed mostly on invertebrates, such as Mayfly and Caddisfly larvae

When arriving at their chosen breeding ground, the female salmon scrapes a depression in the river bed (a ‘redd’), in which she lays her eggs, which are immediately fertilised by a male, and then covered in gravel by the female. in 2018 I was watching three female salmon at Gilfach nature reserve, with one male patrolling back-and-to near them; when another male approached, he was soon seen off amongst much splashing about; presumable the original male was protecting the eggs he had fertilised against another male attempting to fertilise them. After hatching the young spend up to 6 years there before migrating to the sea, where they spend between 1 and 4 years feeding and growing. When ready to breed, they return to where they were born (identified partly by using the Earth’s magnetic field), to start the cycle over again.

The Wye lost most of its Salmon in the late C20,  but in recent years they have returned, and are certainly breeding again in the Dernol, though in very small numbers – I saw an adult making its way up the Dernol in autumn 2019, the first time I had done so.

Some years ago (maybe about 2012 – 13), I saw two people wading up the Dernol, and went to see what they were doing in case it was damaging to the river. They showed me a permit (looked genuine!) stating that they had been authorised to take some young salmon from the river for a study taking place at Exeter University. I said that they’d be lucky to find any! They had walked from by the cattle grid just up from the chapel to the ford opposite Glandernol, and were using electro-fishing apparatus to stun the fish (but not harm them); they showed me their bucket, and they had over 20 young salmon in it, and they said they wanted 30 in total. I was very surprised! It does explain why a heron often fishes in the river.

The gravel beds in the upper end of the Dernol are part of the reason for its SSSI designation, as these are where the Salmon lay their eggs, and the young spend the early years of their lives.

Britain’s only native trout, they live in clean, clear fast-flowing streams with stony bottoms. They are a brassy brown colour, with brown to red spots on their upper sides, a a pale creamy belly. Those in the Dernol are at the dark end of the range of colouration. Lifespan – 15 – 20 years, though many live much less than this.

Most spend their whole life in freshwater rivers, but some (mostly females) become migratory and spend part of their lives in the sea before returning to fresh water to breed; these migratory ones are the same species as Brown Trout but have been named Sea Trout.

When ready to breed (January – March), the male scrapes a small depression in the river bed and guards it until he attracts a female to lay her lay her eggs in it, after which he fertilises the eggs and then covers them with loose gravel.

Young Brown Trout feed mostly on invertebrates, such as Mayfly, Damselfly and Caddisfly larvae; older ones also feed on these, but also small fish. In the Dernol they don’t grow large enough to eat the occasional young bird that falls into the water from a nest, or small swimming mammal, which larger specimens elsewhere occasionally do.

So far I have been unable to photograph any fish in the Dernol, but if I do, I’ll post them on here. 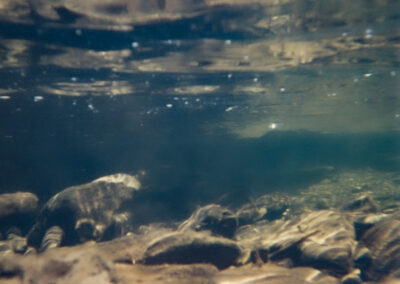 Some fish just swum out of sight in the River Dernol

Some fish just swum out of sight in Nant-y-Dernol